A strong turnout of bidders in the room bolstered by an enthusiastic online following saw strong performances at our March Fine Art Sale (14th & 15th March 2019). We take a look at just some of the highlights of a sale which achieved the highest percentage of lots sold for over two years…

Day 1 – Art and paintings
Day 1, with a focus on art, showed a diverse range of paintings and mixed media artwork bringing in the bids. The star of the show has to be Lot 300 - an 18th Century English school oil on canvas portrait of Portrait of Rev. John Owen D.D. Unframed, and with the canvas having been re-lined, it was among several paintings consigned by a longstanding local vendor, and saw the hammer fall at an impressive £2,600. In stark contrast stylistically, an early highlight was a collection of seven modern prints, including Doug Hyde and Paul Horton (Lots 14 – 20). They achieved a combined £915; evidence that the auction room can provide great finds for those looking to furnish modern interiors, too.

The sale also generated a few ‘sleepers’ throughout the day. These included Lot 24, a styling drawing for coachbuilders J Gurney Nutting & Co. of an Airflow Saloon 3 1/2 litre Bentley Motorcar, watercolour, pen and ink, signed and dated 'MAC 1936' lower middle right for A.F. MacNeil (1891-1965). It sold, alongside a further selection of hand coloured Bentley 'styling' images, for £700 to a buyer in the room – shattering its estimate of £50-80. Lot 70 also caused something of a stir – three unframed sketches of nudes signed Duncan Grant (1885-1978) and carrying an estimate of £70-100 sold for £1,200 to an internet bidder, as did lot 170 - 19th / early 20th century Italian school watercolour signed D.Nittis and featuring a street scene with a lady in black hailing a Hansom Cab, which went for £1,300 to an online bidder.

Another hidden gem was Lot 256 – a continental oil on canvas depicting a harbour scene with figures and moored vessels. Carrying the signature H.S.T., dated lower left for 1923 and framed, the bidders were out in force with a phone bidder finally winning the lot at £850. Lot 25 proved a surprise hit - an unsigned mezzotint on etching paper, entitled  'A Philosopher giving a lecture on the Orrery'  it sold for £320 – proving that engravings are not quite so ‘old fashioned’ as one might think.

Continuing the olde-worlde theme was a rather interesting collection of reproduction paintings consigned from Castle Lodge in Ludlow. Painted by West Midlands artist Paul F Workman for the filming of the 1997 film adaptation of Moll Flanders, which shot scenes on location at the historic house, they comprised lots 278 – 281 and sold for a combined £1,010 - all to internet bidders.

While the internet generally reigned supreme, there were some exceptions to the rule – Lot 156, a watercolour entitled ‘Palmy Days’ dated 1877 and signed lower left Edith Martineau, saw a telephone bidder beat stiff online competition when the hammer fell at £340. It was a bidder in the room, however, that won lot 265 – a French school stormy wooded river scene by Charles LeFevere (1875-1956) – with the signature missing due to damage, the impressively-framed piece sold for £480.

Many of the lots featuring in the sale hailed from local sources – Lot 216, a watercolour entitled 'The Accusation' and signed Edgar Bundy originated from a local deceased estate, selling for £500. A local estate also consigned lot 451 – an unsigned Dutch School oil on panel winter scene with figures on an icy river, which sold for £500. However, vendors from further afield are also noting Cuttlestones’ growing reputation for selling artwork – Lot 351, and unsigned oil on canvas Old Master-style religious study dating from the 17th/18th Century and presented in a hand carved swept frame was consigned by a vendor from Lancashire; going on to sell for £500.

The star lot was one of the last of the day – Lot 1027, a 1974 Rolls Royce Silver Shadow 'SCV 410M', which saw the hammer fall at £6,750 to an internet bidder - but not before a real mixed bag of lots provided some interesting highlights. Among the first of the sale was Lot 468 – a lovely mid-20th century Ede & Ravenscroft horsehair Barrister’s wig, presented in its original case, which sold for £260.

Another 20th Century gem came in the form of Lot 500 – an unusual vintage Merrythought Bonzo book horse character plush toy dating from the 1930s, which saw the hammer fall at £320 to an online bidder. The 20th Century theme continued with Lot 522, a stylish Art Deco chrome table lighter depicting French style dancing girls to one side and floral and foliate engraving to the other, which sold to an internet bidder for £220.

The Jewellery section provided several highlights – including Lot 568, two 22ct gold rings that together form a single snake ring. Originating from a local solicitors’ clearance, it sold for £300. Lot 583 meanwhile, a diamond set brooch and earrings set beat its estimate of £300-500 when the hammer fell at £1,100. The final lot in the jewellery section, consigned by a vendor following a valuation day, was Lot 606 – a hallmarked 9Ct gold ‘Bow’ necklace, which sold for £480 despite evidence of some restoration to the bow.

In the watches section, star lots included Lot 610 – a hallmarked 9ct gold Waltham half hunter pocket watch with the winning £500 bid being placed via our own website. Lot 632, an 18ct gold striking on gongs manual wind half hunter pocket watch sold for £1,100 to the same bidder. A house clearance find provided the next highlight in the form of Lot 639, a hallmarked 9ct gold cigarette case, approx weight 148g, which saw the hammer fall at £1,400.

Also in the metalware section, Lot 660 – a silver four piece tea service hallmarked for JB Chatterley & Sons Ltd, Birmingham 1970 – sold to a commission bidder for £400. Another Birmingham silver tea and coffee service – this time a five piece and marked for Barker Ellis Silver Co (1968) hailed from a local valuation and saw the hammer fall at £600. Later in the same section Lot 725, a bronze semi-nude figure of a woman, signed at base Faure and on a stone plinth, sold for £550 to a telephone bidder.

As expected, the Oriental works section caused a flurry of activity among internet bidders. Lot 808, a collection of four Oriental metal scholars’ ink boxes, all with engraved detail, sold for £700 despite all bearing scratches and one piece having evidence of restoration. Lot 845 – a selection of nine Chinese-type water droppers, including blue and white examples, one in the form of a cat and a brass three-brush holder in the form of a kettle, saw the hammer fall at £550. Jade also proved popular – Lot 871, a carved Celadon jade insect, together with a smaller example, sold for £300 again to an online bidder while Lot 873, a collection of four Celadon jade archers’ rings/thumb guards sold for £700. Finally Lot 877, a Chinese Celadon jade carved plaque of cushion form with finely carved decoration to the top edge, together with a circular hoop and square plaque with button fastener to the top achieved £600.

Another exotic lot to catch bidders’ attention was Lot 924, a Late 19th / early 20th Century Aboriginal boomerang, which sold on the internet for £240 to a bidder in Australia. Lot 945 meanwhile, an Egyptian carved stone Osiris figure in black basalt sold for £420, again to an internet bidder.

For the full catalogue, including illustrations and hammer prices, head to https://www.cuttlestones.co.uk/salecatalogue/FA150319.htm. 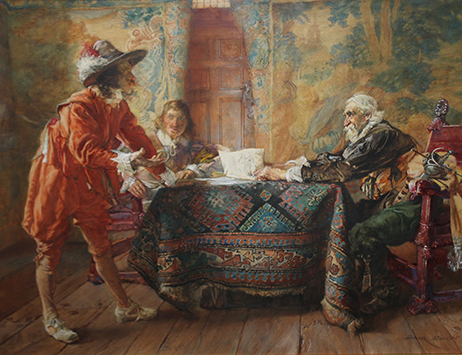