As Wolverhampton Wanderers and its fans enjoy the most successful season in the club's recent history, Cuttlestones will feature some highly collectible 1900s season tickets, amongst other sought-after items, at its upcoming Specialist Collectors' Sale on Friday 3rd May. What better time for Wolves young and old to snap up some vintage memorabilia? 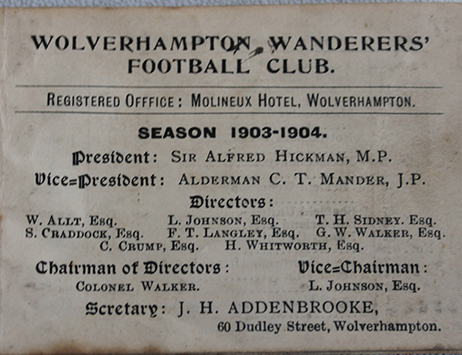 The star of the show looks set to be a lot containing SIX WWFC SEASON TICKETS DATED 1902-1903, 1903-1904, 1904-1905, 1905-1906 AND 1912-1913, each still containing some unusual stubs, along with an original copy of "Sportsman Congratulate The Wolves', Express & Star dated April 25th 1932. Whilst match programmes have long been saved and cherished by supporters, tickets are often discarded, making this a rare opportunity not to be missed for any avid Wanderers collector. We anticipate significant interest, and a gavel price of £800-1200.

Elsewhere, Aston Villa fans will also be interested to learn of a rare 'THE VILLA NEWS AND RECORD' 1936-37, Official Journal of the Aston Villa Football Club. This limited edition, nicely bound volume of journals from August 1936 - July 1937 features match reports, results, articles by legendary manager James Hogan among others. It is set to sell for between £200-300.

These lots will come under the hammer at Cuttlestones’ Specialist Collectors’ Sale at Wolverhampton Auction Room on Friday 3rd May. The fully illustrated catalogue is available online at https://www.cuttlestones.co.uk/salecatalogue/WS030519.htm and viewing will take place from 10am – 7pm on Thursday 2nd May and on the morning of the sale. For those not able to bid in person, live online, telephone and commission bidding options are available. For more information call 01902 421985 or email wolverhampton@cuttlestones.co.uk