Staffordshire auction house Cuttlestones is set to feature a rare Royal Doulton prototype in its upcoming Autumn Antique Sale on 12th September. The figurine, believed to be a prototype ‘Alice in Wonderland’ scene, stands out despite the auction house regularly seeing Doulton figurines pass through. 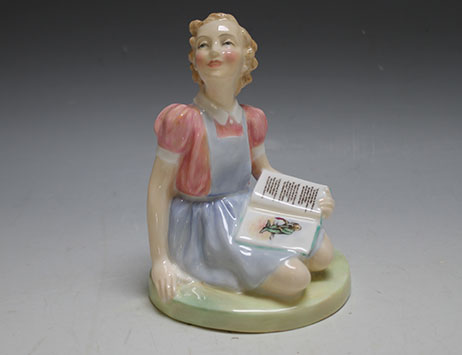 Royal Doulton prototypes - or ‘ones that got away’ as they are referred to by collectors - are noted for their extreme rarity, but also the high standard of the work from the artists that created them. They are often the first examples of any given style to be made from production moulds, and usually only three would be made before the design entered full production.

Not all prototypes entered production - as is the case with this example. Featuring a seated ‘Alice’ reading a book, the figure is dressed in a style contemporary to its early C20th production rather than the style described by Lewis Carroll in his 1865 novel and, while an ‘Alice’ in a similar pose wearing the more recognisable blue dress popularised by Disney is commonly available, this particular version does not seem to have made it beyond the prototype stage. This makes the piece extremely rare and, as such, sure to garner lots of interest in the run up to the auction.

Having been produced in the Staffordshire potteries, just a few miles north of Cuttlestones’ sale room, the lot has been consigned by the son of a former Royal Doulton painter. Cuttlestones auctioneer, Dave Eglington comments:

“This is a very rare and exciting piece! With our Staffordshire base we naturally see a lot of Doulton coming through, but we’ve never handled one of these before. Prototypes are sought after at best of times, but with the subject matter it’s likely to cause a stir among both Doulton collectors and fans of Alice in Wonderland.

“We’ve only been able to track down one similar prototype, which sold for £1,700 a couple of years ago. While this one carries a conservative estimate, there’s every chance it could surpass this, especially given that we attract a global audience of bidders. It’s always great to see a piece of Staffordshire history pass through the saleroom, so we’re really looking forward to seeing what it achieves.”

The lot, carrying a guide of £300-500 will sell during Cuttlestones’ Autumn Antique Sale will be held at the Penkridge saleroom on Thursday 12th September. Viewing will take place from 10am-7pm on Wednesday 11th and the morning of the sale, with live online, commission and telephone bidding options available for those unable to attend in person. For more information call 01785 714905 or email office@cuttlestones.co.uk