Staffordshire auction house Cuttlestones will see a local historical relic pass through its Wolverhampton sale room next month, as a diary belonging to Lord Hatherton, who lived at Teddesley Park in the mid-19th Century, goes under the hammer. 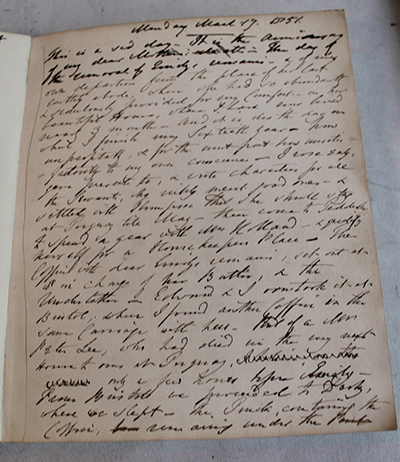 The Victorian politician, born Edward Walhouse in 1791, was influential in a number of historic reforms during his 40-year career - including the Truck Act of 1831, the Parliamentary Boundaries Act 1832 and the Municipal Corporations Act 1835. He was also actively involved in Catholic Emancipation and the Irish question; holding the post of Chief Secretary for Ireland between 1833 and 1834.

The handwritten diary covers the period between March and June 1851; detailing his time at Teddesley Hall and in London with various characters including the 19th century lawyer and politician John Benbow. A further handwritten journal recounts another family member’s journey to Rome between November 1870 and February 1871, including interesting accounts of the state of various places in France after the Franco-Prussian war and a visit to Mount Vesuvius.  The lot includes a third volume, which appears to be a transcription of extracts from Lord Hatherton's journal relating to Teddesley from 1817 to 1863, but it is unfinished; containing entries only up until 1820.

In addition to Teddesley Hall, which remained in the Littleton family until its demolition in 1954, Lord Hatherton owned significant lands in Staffordshire alongside large holdings in agricultural and residential property, coal mines, quarries and brick works around Penkridge, Cannock and Walsall. Cuttlestones’ book expert, Rosie Blackburn, says:

“Lord Hatherton was one of the political movers and shakers of the 19th Century – he was a prolific journal keeper, with many of his works previously published with the majority of volumes held by the Staffordshire Records Office. However, it’s rare to see original, handwritten documents come up for sale – back in 2012 another, slightly later, diary came into the saleroom and went on to achieve an impressive £900.

“The example set to sell in our December sale was found in a skip years ago and passed down the family. It carries an estimate of £500-£700 although it has the scope to achieve more, being of interest to those who specialise in Victorian political history as well as those with a passion for local Staffordshire history.”